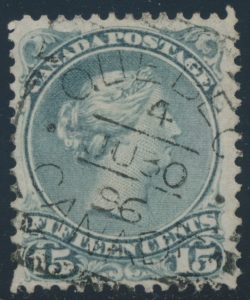 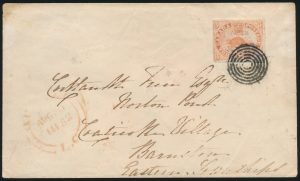 Lot 5 Canada #1 1851 3d red Beaver Imperforate on Laid Paper on Cover, mailed Québec City on AUG.20.1852 and addressed to Coaticook (in the Eastern Townships, a rare destination in this period and could be unique), with dateless receiver on back, in red. Franked with a 4-margin (including three large) laid paper imperforate, tied to cover by a bold target, which has been removed to confirm laid lines and hinged back. Cover is a tiny bit stained and there is an opening tear on the back flap, still an appealing cover franked with Canada’s first stamp. Accompanied by a 2016 Greene Foundation certificate. Unitrade CV$2,000, sold for C$1,350.00 plus buyer’s premium. 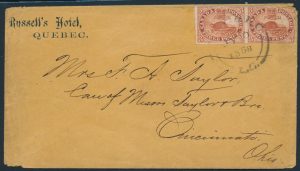 Lot 23 Canada #7iv 1855 10d blue Cartier with Re-Entry in Pos. 53 on Cover, mailed Quebec City on APR.12.1856 and addressed to New York. There is a Montreal transit datestamp on reverse. Stamp has four margins (close at bottom left) and shows part of adjoining stamp at top, tied to cover by a black target. There is also a red PAID handstamp on front. Very fine and accompanied by a 1981 Greene Foundation certificate. Unitrade CV$4,500 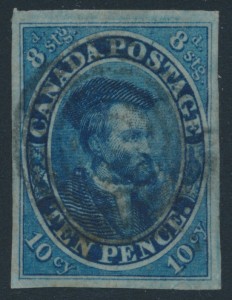 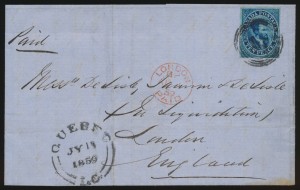 Lot 21 Canada #7 1855 10d blue Cartier on Folded Letter, mailed Quebec City on JUL.11.1859 (just into Cents era) and addressed to London, England (red AUG.1.1859 receiver on front) and carried there on the Cunard Asia. Stamp, which has two large and two close margins, is tied by a 4-ring #37 numeral. File folds as usual, else fine. Ex. Cantor and accompanied by a 2011 Greene Foundation certificate. Unitrade CV$3,000