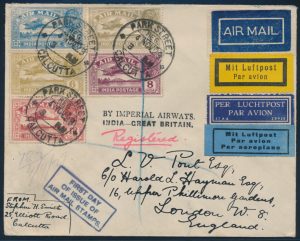 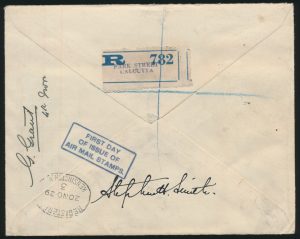 Lot 1564 India NOV.4.1929 First Day of Issue of Air Mail Stamps Flown Registered Cover, mailed from Park Street Calcutta to Leon Pont in London England, “by Imperial Airways / India – Great Britain.” The cover is franked with all five stamps issued on that day (the 2a was issued later), and has four different air mail labels plus a boxed “FIRST DAY / OF ISSUE OF / AIR MAIL STAMPS”, with Park Street registration label on back, plus an oval registration receiver dated NOV.30. The cover is signed on back by G. Grant (the designer of the stamps) and Stephen H. Smith. Small tear at top, into the 4a stamp, still very fine and rare. From the The Leon Victor Pont Collection of Early India, New Zealand and Worldwide Pioneer Flight Covers. Est $2,000, sold for C$3,200.00 plus 17% buyer’s premium. 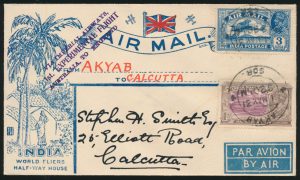 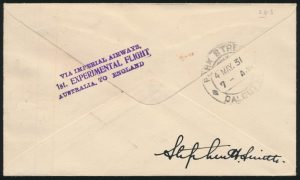 Lot 1573 India MAY.1.1931 Akyab to Calcutta First Flight with Stamp Variety, lovely cacheted envelope is franked with a 1a KGV definitive, plus a 3a Air Mail stamp, the latter with with 1 instead of second I” variety (S.G. #221b £325 for used). Front and back ALSO have a purple handstamp reading “VIA IMPERIAL AIRWAYS, / 1ST EXPERIMENTAL FLIGHT / AUSTRALIA TO ENGLAND”. Cover is addressed to Stephen H. Smith (and signed by him on back), alongside a MAY.4 Calcutta receiver. A scarce variety, especially on cover, very fine. From the The Leon Victor Pont Collection of Early India, New Zealand and Worldwide Pioneer Flight Covers. Est $100, sold for C$1,250.00 plus 17% buyer’s premium. 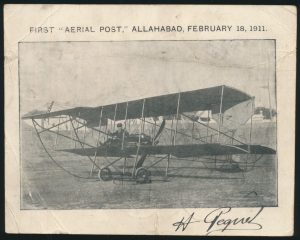 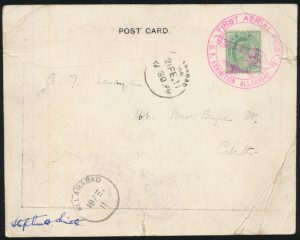 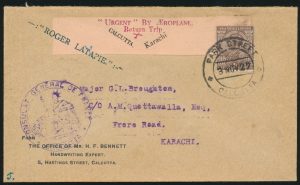 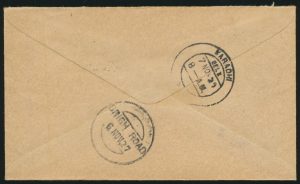 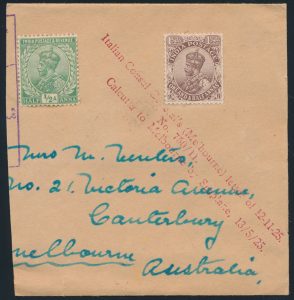 Lot 1550 India 1925 de Pinedo World Flight, Calcutta to Melbourne, franked with a ½a and 1½a KGV definitives, with a red handstamp reading “Italian Consul General’s (Melbourne) letter of 12-11-25. / No. 750/11. / Calcutta to Melbourne by Seaplane, 13/5/1925.”. Back shows a purple cachet with map “ITALIAN / WORLD AIR / FLIGHT” (also another strike partly visible on front), with green initials of Stephen Smith and the president of the Aero Philatelic Club of India H.A. Outhwaite (these, apparently to prevent duplication). This is the right half of the cover only, as the 93 existing covers had all been intentionally cut in half, as they had been signed by de Pinedo after a promised charity donation had failed (the half with his signature are missing). Accompanied by a fairly contemporary article written on these interesting covers. This one is numbered 76 (out of 93), very fine and rare. See scans here. From the The Leon Victor Pont Collection of Early India, New Zealand and Worldwide Pioneer Flight Covers. Estimate $500, sold for C$1,150.00 plus 17% buyer’s premium.