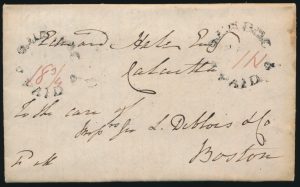 Lot 1089 1826 Québec City Folded Letter to Calcutta, Via Boston, mailed from Québec City on January 15th, 1826 (datelined inside and dated backstamp of a fine Québec Fleuron, in use 1825-1830) and addressed to Edward Hale in Calcutta, care of L. Deblois & Co. in Boston. The front shows two fine strikes of the QUEBEC / PAID (in use 1817-1830), one with the currency rate to the border “1N” and the other with the rate to Boston “18¾”. The long and interesting letter of four pages would have been carried to Calcutta by favour, and docketing indicates it was received there on June 16th 1826. Born in 1820, Edward Hale was the secretary of his uncle Lord Amherst in India from 1823 to 1829 (the period when this letter was mailed to him there). The Deblois family were merchants in Boston who imported goods from England and India twice a year, and therefore would have been able to carry this letter by favour. The contents are full of political news and gossip of the day. A very fine and interesting letter. Estimate $500, sold for C$625.00 plus 17% buyer’s premium.