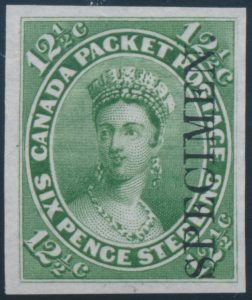 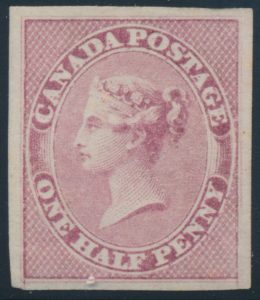 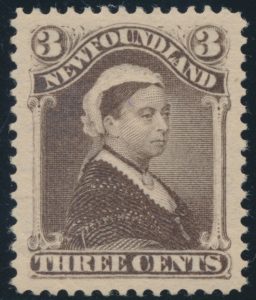 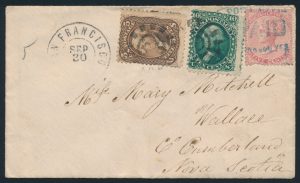 Lot 917 1867 Victoria BC to Nova Scotia Via Panama and the United States, franked with a perforated 5c rose British Columbia issue (Scott #5) paying the Colonial domestic rate, tied by an oblong oval “Post Office / Victoria Vancouver Island / Paid” in blue. The cover was forwarded to San Francisco (arrived there SEP.30) and franked with a 5c Jefferson and 10c Washington, both tied by cogwheel cancels, the rate necessary for the rest of the voyage, which consisted in travelling south in a closed packet by steamer to Panama, where it would have crossed by rail to the Atlantic side, took another steamer to New York, and then on to its destination. The back shows three datestamps: Amherst NS (OCT.23.1867), Pugwash (OCT.24) and finally Wallace receiver (OCT.24). According to Robson Lowe, the entire trip was of 6,455 miles (sea distance). Small faults to two of the stamps, still a very fine and rare cover, the only one we have seen with this exact franking to the Maritimes. A similar cover to Nova Scotia (with same US franking but with a 2½d imperforate) recently sold for US$35,000. From a recent find by a descendant of the addressee, therefore on the market for the first time ever. Estimate C$2,500.