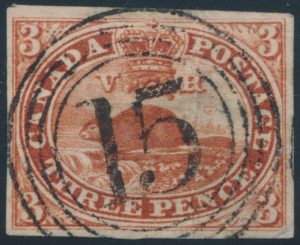 The $1500 lot we featured yesterday was the standout, but it was only the highest in a run of seven stampless folder letters in the Canada section that deserve highlighting, all of which sold for much over our estimate and attracted spirited competition.

Lot 1206 CVR 1842 Brandy Pots C.E. to Montreal Stampless Folded Letter. Originating on ship “Mercey” (datelined inside) then went through Quebec City on DEC.3.1842 and addressed to Montreal, this letter was written on the ship “Mercey” which was anchored at Brandy Pots Harbour (on the south shore of the St. Lawrence, 90 km east of Quebec) and the letter was then likely transferred over to an incoming ship to be delivered in Montreal (there is a “Way” notation on front). An interesting letter concerning the great condition of the ship in the bad weather. Very fine and on Fred Stulberg written-up page. Sold for $200 plus premium.

Lot 1207 CVR 1872 Thunder Bay Registered Cover to Toronto. Mailed Thunder Bay (Broken circle dated APR.25.1842 – earliest recorded date) with many markings including two boxed “REGISTERED” on back, “PAID 6”, “Windsor M.O.O. ONT” cds transit on back (likely travelled through the US via Duluth, Minn. because of winter weather and re-entered in Windsor). Very fine and written-up on Fred Stulberg page. Sold for $160 plus premium.

Lot 1211 CVR Collection of Early Toronto Postmaster Stampless Folded Letters. With eight letters, each addressed to or from a postmaster in Toronto, dated 1832, 1833, 1834, 1836, 1837, 1838, 1849 and one undated. Mostly to or from William Allan, Charles Berczy, James Howard and mostly about changes or appointments to postmastership in Toronto. All but one were mailed FREE franked. Very interesting reading, and mostly on well written-up pages. Ex. Fred Stulberg and very fine. Sold for $450 plus premium.

Lot 1212 CVR 1838 Historical Letter re. 1837 Upper Canada Rebellion. Mailed City of Toronto JUL.12.1838 and addressed to Clerk of the Peace in Cornwall. This letter was written by Governor William MacAuley (signed) following the December 1837 rebellion and instructs the Clerk of the Peace to be aware of the new “Act to Prevent the Unlawful Training of Persons to the Use of Arms and to Practice Military Evolutions and Exercises” and asks him to make sure that the surrounding justices of the peace be given copies. Also included in this lot are two Stampless Folded Covers addressed to William Lyon Mackenzie (grandfather of future prime minister) the leader of the 1837 Upper Canada Rebellion. Very fine and written-up on Fred Stulberg page. Sold for $450 plus premium.