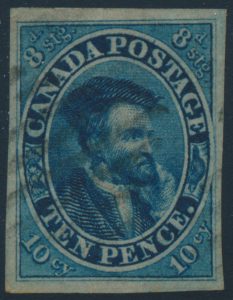 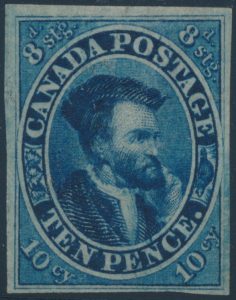 As we have done for several auctions now, we group some of the more distinctive postal history items along with the stamps of their time. The following lovely mourning cover is offered early in the Canada section, which takes place this afternoon. 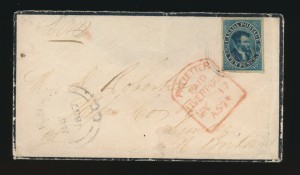 Lot 43 Canada #7 1855 10d blue Cartier on Mourning Cover, mailed at Québec in May, 1857 and addressed to Dundee, North Britain. Red tombstone Packet Letter receiver dated MAY.17.1857 on front, partially over stamp. Stamp, which has four large margins, is tied to cover by a light 4-ring #37. Light overall wear, and missing its backflap, else a very nice cover. Accompanied by a 2013 Greene Foundation certificate stating “stamp may have been removed and replaced.” Unitrade CV$3,000