Our ninth auction is the most varied and comprehensive to date. The 2167 lots offer something for every collector.

It begins with a strong Canada and BNA section of 589 lots. The Pence issues are well-represented with a good selection of very fine including multiple very fine examples of the scarcer 7-1/2 and 10 penny. The half-penny imperforate features a lovely red postmark, while the perforated half-penny has a foreign postmark. For the budget-minded we have lesser quality, for example a very fine appearing mint example of the rare Scott #10 with Certificate but repaired which we estimate at about 5% of catalogue value. The Cents issues and Large Queens each have a number of uncommonly very fine mint examples. Both the Small Queens and the Jubilees each has a standout large mint multiple — a six cent Ottawa printing block of thirty and a five cent block of twenty respectively. The session continues to delight for 460 more lots.

One of the gems in the British Commonwealth section is a four-margin used block of the 1840 two penny blue. Interesting and scarce lots abound in this session. 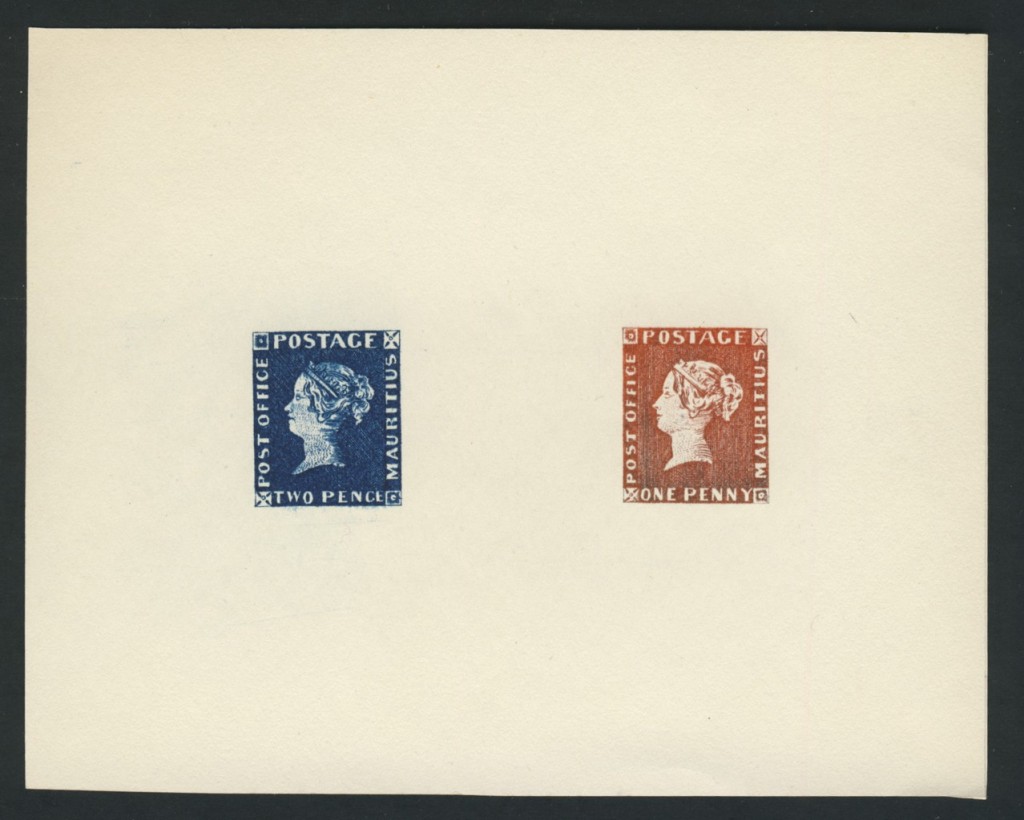 Special mention of Mauritius number one and two must be made. We offer the compound Die Proof of these fabulously expensive iconic issues. It is a post-contemporary production made from the original Dies which were found in 1912 and is scarce in its own right.

Our worldwide stamps with 324 lots begin with a few modest USA then the unusual and the rare appear frequently among the nice quality collector oriented lots. China includes the rare Formosa railway locals as well as a few modern including a 1980 monkey, France and Germany each have a great variety among more than a hundred lots. French Colonies #35a deserves special mention. Iceland and Italy each have some expensive a highlight being the used pair of Iceland Scott #32b. The offering of Japan has the Mayeda collection (ISJP member #2) in over fifty lots. We continue this session with classics, essays, and locals etc.

Postal history is a field where our consignors are, with each auction, offering increasingly interesting and collectible items and collections. This auction, in addition to many lovely single covers (including Canada pence, British Columbia high values, New Brunswick and Nova Scotia bisects), there are dozens of lots which might easily form the basis for a whole new field of collecting enjoyment. These lots were usually assembled over years and decades as the owner sought out the rare and elusive. The successful bidder can continue and expand the collection. Another option is to seriously consider developing an award-winning Exhibit. The extensive postmark collections in this session can lead to similar fun and achievement.

One group of twelve lots, the Viner military memorabilia collection, can be found in the catalogue with two-and-a-half pages of text and scans. However the complete write-up of this collection is more than ten times as lengthy. It can all be found on our website along with extra scans.

In our last auction we offered an extensive number of cartons, albums, and stockbooks in our large lots session. This time the emphasis is more on collector-built specialized offerings as well as generally more valuable and more diverse lots than in the past. And, this auction has even more bulk and with 728 lots has considerably more than last auction.

The auction has been posted to stampauctionnetwork.com. The printed catalogue is presently being mailed to subscribers. Watch www.sparks-auctions.com for additional images, corrections, and featured items as the auction dates approach.