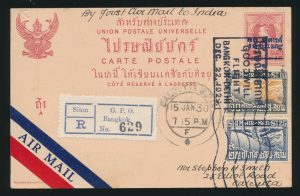 Lot 1624 Thailand Group of 27 First Flight or Airmail Covers and Cards, 1919 to 1930, with two items from the 1919 flight Bangkok to Chandabury; a 1927 first flight Bangkok to Batavia; Eight first flight cards from 1923-25; A DEC 22 1929 first flight “Goodwill” by Siamese Plane Bangkok to Calcutta India (Stephen Smith) where the plane crashed in forest shortly after takeoff and pilot got killed. The mail was rescued and forwarded to Calcutta by the Royal Siamese Air Force. Also a variety of other interesting material, some addressed to Hanoi, Bangkok or Calcutta, with a variety of flights, frankings, cachets, etc. Overall fine or better, two are damaged by water. From the The Leon Victor Pont Collection of Early India, New Zealand and Worldwide Pioneer Flight Covers. Estimate $200, sold for C$3,400.00 plus 17% buyer’s premium.