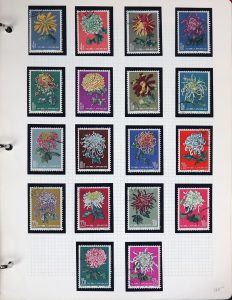 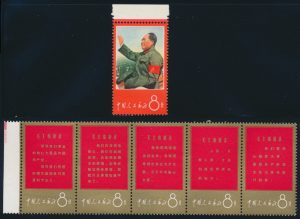 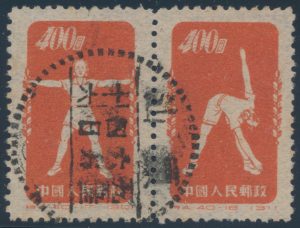 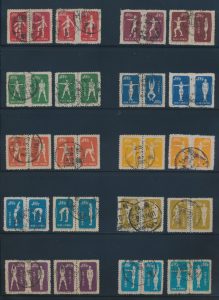 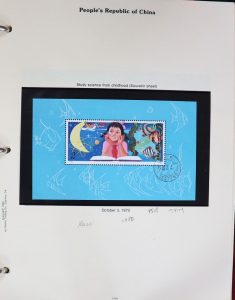 Lot 1153 China (PRC) Extensive Specialized Collection of Used in Six Albums, 1949 to 1982, left intact as received (a few duplicated items were lotted separately) and essentially complete from 1949 to 1970. The period from 1971 to 1982 is probably about 60 to 80% complete and there are pages for up to 1987. The collection includes both original and reprint issues up to, and including the 1952 Gymnastics set, and it is important to note that there are a number of additional copies for most of the stamps, sometimes up to 3 or 4 copies, usually with postmark interest, indicated by owner as “PU” for postally used and/or CTO, and each additional copy is tucked underneath in the mounts, so not immediately noticeable if not closely inspected, although owner usually notes how many copies there are in the margins (this often includes the expensive sets of the late 1960s). The collection is also enhanced by many blocks, pairs, on piece, first day of issue postmarks (usually on piece but sometimes on cover), paper and perforation varieties, printing varieties, postmark studies, souvenir sheets (many cataloguing several hundred dollars each), and much more. A notable collection with almost every stamp being presented with a postally used cancel (usually more than one copy), which according to Scott footnote “postally used stamps generally sell for ½ the unused price” which in this case represents a huge dollar amount. Our many scans only show a small portion, so we highly recommend viewing this one in person, to better appreciate the high level of completeness, quality, quantity and scarcity of many of the items. Estimate $15,000, sold for C$12,000.00 plus 17% buyer’s premium.