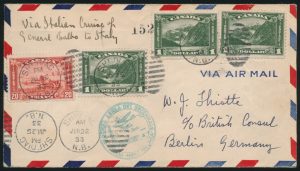 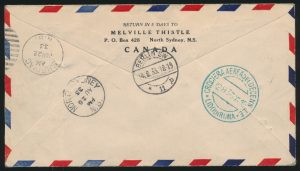 Lot 825 1933 Balbo Flight Cover to Germany, mailed Shediac NS (JUL.25.1933 duplex) to the British Consul in Berlin, Germany via General Balbo Italian Air Squadron flight. Sent via Rome, Italy (AUG.8 backstamp) and arrived in Berlin on AUG.14. Apparently returned to North Sydney NS one month later on AUG.26 (backstamp). The cover is franked with three $1 Mount Cavell (#177) and a 20c Harvesting Wheat (#175), with special blue cachet on front. The Airmails of Canada and Newfoundland (1997) indicates that only 70 pieces were carried from Shediac to Rome on JUL.25. Most of the mail carried by Balbo’s squadron with Canadian stamps were from Shediac or Montreal to Chicago (490 pieces for that). A rare and very fine piece of air mail history. AAME CV$1,000.