We are approaching the end of lotting and input for Auction #12, with catalogue preparation to follow shortly. While we do not have a firm auction date yet, we expect a March auction and will make an announcement soon.

The first of our Auction #12 previews showcases a seldom-offered Canadian rarity. 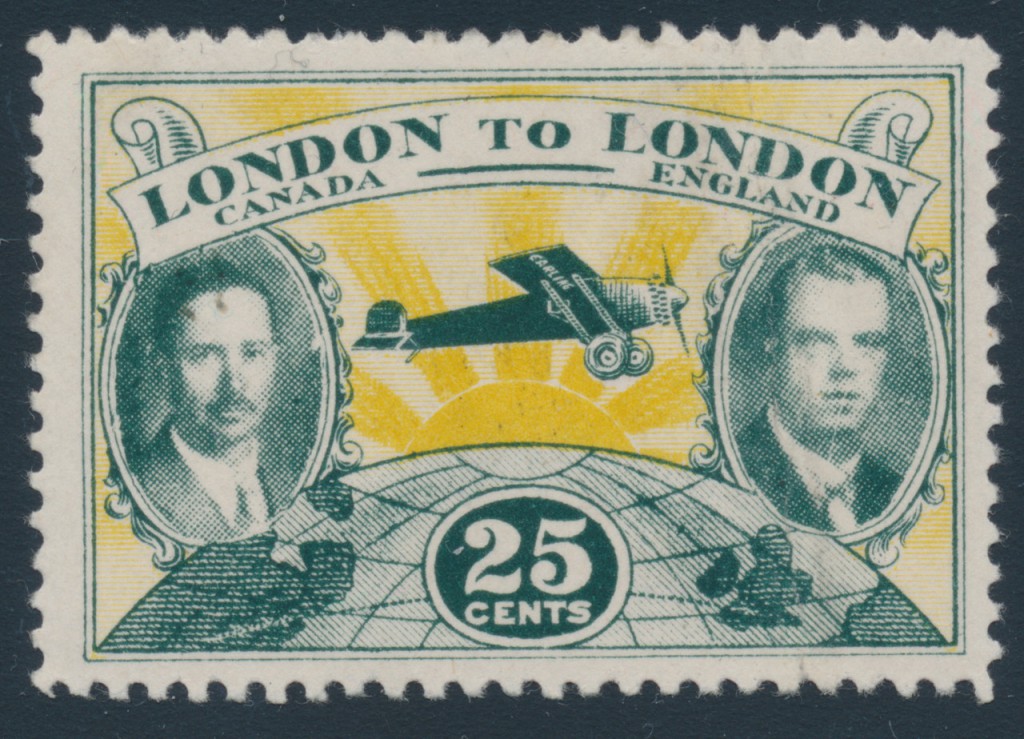 Canada #CLP6 1927 LONDON to LONDON FLIGHT 25 cents green and yellow. In 1927, Carling Breweries offered a $25,000 prize to the first Canadian or British pilot to fly from London, Ontario to London, England. A Stinson SM-1 was christened Sir John Carling and attempted the flight starting August 29, 1927, flown by pilot Terrance Tully and navigator James Medcalf.
Postal Authorities approved the printing of a special label to be applied to the envelopes which were to be carried on the flight. Only 100 labels were printed and approximately 87 were affixed to envelopes.

The flight had difficulties with fog and returned. It restarted on September 1 and made a landing in Maine, then later in Harbour Grace, Newfoundland. On September 7 the flight set off across the Atlantic, never to be seen again. No covers on that flight survived.

The special label which was officially approved features portraits of Tully and Medcalf and shows the proposed route.

The example we offer is very well-centered, has full original gum which has never been hinged and has very fresh and deep colour, unlike some other surviving examples.

The stamp has two certificates. In 1987 it was “in perfect condition” and Enzio Diena lightly initialed the stamp on the back. Since then the stamp has acquired small stains on Tully’s forehead, a light vertical crease and very slight soiling. All of these are mentioned (accurately but somewhat harshly) in a 2006 Greene Foundation certificate.

Despite the faults this is an attractive, well-centered example of this very rare stamp of which only 13 unused examples are known. Unitrade Catalogue Value is $100,000.