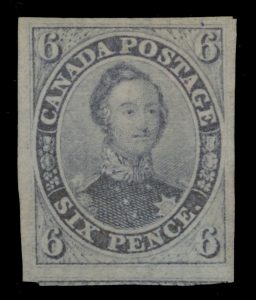 This stamp has two Certificates of Authenticity, both from the Greene Foundation. The first from 1994 and second from 2015 states “…2b unused on laid paper, brown purple shade, genuine in all respects.” Neither Certificate mentions the droplet of printers’ ink in the upper right corner.

From the Outaouais Collection.