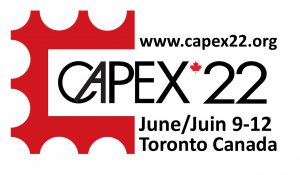 David McLaughlin, President of CAPEX 22 and Peter MacDonald, General Manager of Sparks Auctions, are pleased to announce that Sparks Auctions has joined CAPEX 22 as a Partner Level sponsor. “Sparks Auctions exists to support consignors, collectors, exhibitors and dealers with our auctions, so it is natural that we would play a major role in supporting Canada’s next international exhibition. We are proud to join the entire philatelic community in next year’s celebration of philately,” said MacDonald recently. “We are especially happy to sponsor the CAPEX 22 website, since online platforms and social media become even more essential for the philatelic community to interact and share its stories.”

McLaughlin added, “The participation of the philatelic trade is vital to the success of CAPEX 22 and we are thrilled that Sparks Auctions is among those leading the public and financial support of the show, early and substantially. In addition to sponsorship of the CAPEX 22 website, Sparks Auctions will sponsor other opportunities for our community to gather, which will be announced as plans roll out in the coming months.”

For more about CAPEX 22, you can read the entire press release at this link. La version française se trouve sur cette page-ci.