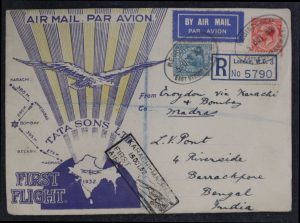 Lot 1511 1932.OCT.15-18 Madras to Karachi and Back, from Croydon, England First Flight Set, includes all four legs of the Karachi to Madras (15 OCT) and all four legs of the Madras to Karachi (18 OCT), to and from Ahmedabad, Bombay, Bellary and Madras, to and from Croydon England. These all with Union Jack design. Three more covers are included without Union Jack flag, all from Croydon, England to Bellary, Madras and Ahmedabad. These colourful covers were designed by Stephen Smith “by Sanction of Messrs. Tata Sons Ltd” with inscription on back reading “A Souvenir of a Great Indian Enterprise” and signed by Stephen Smith. The cover design was originally submitted with a Union Jack, which proved to be less than popular, so most of the stock was destroyed. Those that remained were meant for foreign collectors, and those without the flag for Indian collectors. All of these are addressed to Mr. Pont, in Bengal, India, and rrom the Leon Victor Pont Collection of early India First Flight postal history. Some have staining or small faults (mostly on back), still overall fine and a rare offering. Estimate $300, sold for C$1,050.00 plus 17% buyer’s premium.