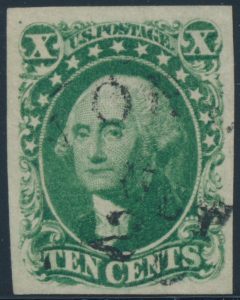 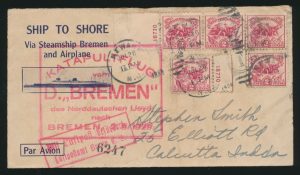 Lot 1633 United States August 1927 Bremen Catapult Flight Cover to India, franked with 20c in postage, mailed at Newark, New Jersey on JUL.26.1929 and sent to Europe via the Bremen Catapult Mail Service. Has the usual Bremen “KATAPULTFLUG” cachet for this flight. Addressed to Stephen Smith, the dean of Indian Air mail, and good friend of Mr. Pont, in Calcutta, India, and signed by him on back (in 1929). Few small faults, still a rare catapult flight destination, with both sides scanned online. From the The Leon Victor Pont Collection of Early India, New Zealand and Worldwide Pioneer Flight Covers. Estimate $100, for C$2,600.00 plus 17% buyer’s premium. 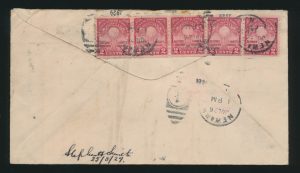 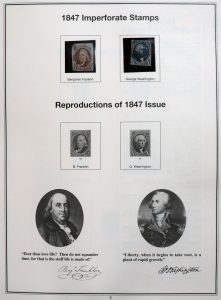 Lot 1561 United States Extensive Mostly Mint Collection in Six Albums, 1847 to 2013, left intact as received, and probably the most complete we have ever handled. The collection is in six Mystic albums (stamps are in black mounts) with matching slipcases, and has a mix of mint and used up to the 1890s, then predominantly mint to the end, with never hinged starting fairly early on. The collection is essentially complete for regular issues from about 1870 and on (with much material before then), and includes lots of extra material such as coil pairs and singles, souvenir sheets, a few plate blocks, booklet panes and booklets, printings and varieties, blocks, self-adhesive mini-sheets, and more. There are numerous expensive stamps throughout (many in the several hundreds to thousands of dollars), both in the early period as well as in the modern period, with way too many to list, so we have scanned the first 150 pages online to give an idea. The back of the book sections were lotted separately. A lovely collection, with an enormous catalogue value (not to mention the huge face value), and overall fine to very fine, except in the early period where stamps may have no gum, or hinge remnants, or trimmed perfs, etc. We counted the face value for 2011 to 2013 only, which adds up to US$397 (including 517 Forever stamps). A great opportunity for continuation, or for dealers to break up and resell. Estimate $15,000, sold for C$13,000.00 plus 17% buyer’s premium.