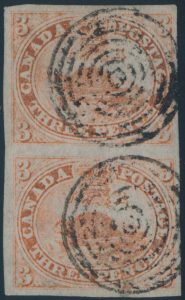 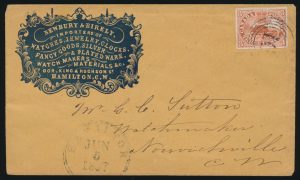 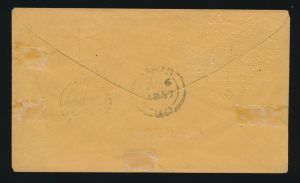 Lot 741 Canada #4 3d Red Beaver Imperforate on 1857 Illustrated Advertising Cover, mailed from Hamilton on JUN.5.1857 (“changeling” datestamp at left) to Norwichville C.W., with Norwichville and Paris backstamps, both dated JUN.6. The cover has a lavishly illustrated embossed corner card advertising for the Newbury & Birely company of Hamilton in blue-black, and is franked with an extremely fine example of the 3d red Beaver with four large and balanced margins, neatly tied by a crisp 4-ring #16 obliterator which has an RF 7 on Pence issues (only used in the Pence era), and an early example, as the first 4-ring numeral known is dated from March 1857. A lovely cover in all respects, which possesses many desirable attributes, extremely fine and easily worth more than our starting price. Ex Guilford (1994), Carrington (2002) and Cantor (2011). Rsv. $4,500. Estimate C$5,000. 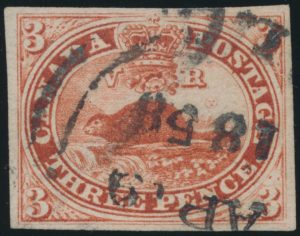 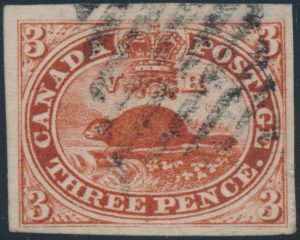