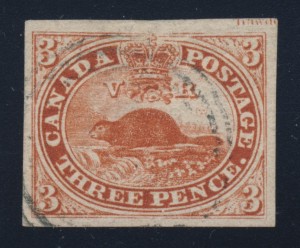 Canada #4c 1852 3d red beaver on soft ribbed paper, used with a lightly struck postmark, huge margins all around showing a portion of the plate imprint at upper right, extremely fine. Accompanied by 1974 BPA certificate. A lovely example of this stamp which is rarely encountered in premium condition. Unitrade CV$750, realized $862.

The great majority of all stamps can be identified with certainty. When one comes across a stamp which raises questions, however, certainty is often difficult. Questions may concern the catalogue number, whether genuine or not, with or without original gum, with or without postmark, evidence of alterations or repairs, etc. A certificate from a recognized authority can often answer these questions. Certificates are prepared by humans, however, and mistakes can be made between a determination of genuine and not (in either direction!).

Generally speaking one should prefer an opinion which is unequivocal — “is genuine in all respects” or “is a forgery” usually settles the matter. “Appears genuine as far as one can tell” or “no opinion” does not help much. Whole books have been written on the subject.

With this background in mind, we’ll look at two lots in our current auction. Both have certificates from the VG Greene Foundation which is the pre-eminent expert committee for the stamps of Canada and British North America.

1851 3d red Beaver on laid paper, used with three jumbo margins and fourth well clear of outer frameline. 1978 Greene Foundation certificate mentions a “small hole” which is a pinhole not on this stamp, or in the margin but in the portion showing the next stamp at top right. A very fine example of Canada’s first stamp. Unitrade CV$1600.

1860 2c lilac, pair one bisected on cover From a new find, backstamped Liverpool, NS APR.22.1868. As the Large Queen issue was introduced in April 1868, many postmasters wished to use up the old Nova Scotia stamps. Three cents was the new Dominion rate. In 2010 the Greene Foundation wrote “the item could be genuine but the lack of a cancel tying the bisect line to cover prevents us from giving an opinion.” Not noted by the Greene Foundation was the lack of evidence of a scoreline in the event someone has used a scalpel or knife to create a bisect and also a faint staining which ties the bisect to the cover. Envelope has a stain and is damaged in upper left and lower left corners. Both stamps have some damage. Unitrade CV$3500.

Here is another example of a lot where we added commentary to the description. I concur with the opinion of perhaps the foremost authority on Nova Scotia postal history that this is genuine. Both of us have examined it thoroughly and have the oral evidence of it being a new find (see also Lot 1269). An April 22 date (the new Dominion stamps were first available April 1) and the fact of a 50% increase in postage at the same time for an in-county Nova Scotia letter suggests that no respectable and frugal correspondent would voluntarily put two of his old colonial stamps on a letter.

However all that background is lost once this envelope changes hands several times. The faint stain which ties the bisect is evidence when the envelope first surfaces but hardly evidence decades from now. The Greene Foundation did not err with its “no opinion.”

For some items a collector has to live without absolute certainty.

We continue working aggressively on the large volume of material for Auction #8, so another story about a consignment is worth telling.

It was less than half an hour until the auction time at our November 2010 sale and I was starting to make my way downstairs to the auction gallery to begin calling the sale. As I reached the stairway, I was called over to the retail counter where there was a gentleman with a stamp album of material he was hoping to consign. He did not have an appointment so I was concerned how long it would take to politely pass him off to another staff member.

Despite the interruption, I took the album from him and to my delight, there was a lovely mint three penny beaver with four large margins.

The balance of the album was similar quality and was highlighted throughout with many lovely stamps.  Without seeming to rush I was able to have a contract laid out and signed and the owner quite satisfied and still make it downstairs to start calling the auction on time.

This collection is just one of many we will be featuring.