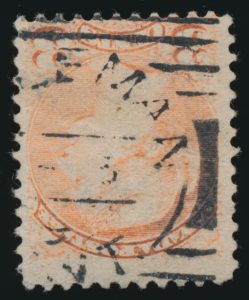 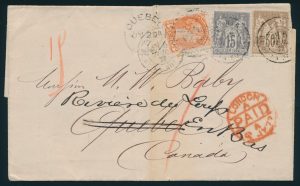 Lot 1032 France #12 1877 pre-UPU France to Canada redirected, a folded letter mailed from Paris (Place de la Bourse JUL.5.1877) to Québec City (JAN.20 receiver on back) through London (JUL.6 PAID transit on front, plus an orange crayon “1d”). The letter was then forwarded to Rivière du Loup en Bas, by adding a 3c Small Queen, tied by a Québec duplex on JUL.20. The letter was finally received there on the same day. A lovely three-colour, dual country franking on a folded letter (no letter inside), with a vertical crease and tear at top, both not affecting the stamps or the pleasing visual aspect. Letters are scarce to rare from France to Canada in this period, and this one is no exception, especially with its added interest. Estimate $1,500. 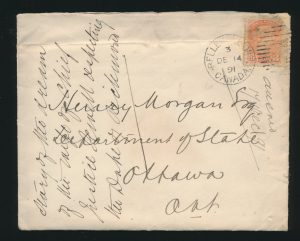 Lot 512 Canada #41 1891 Letter re Fourth Duke of Richmond’s death in Canada in 1819. Sent to Henry Morgan in Ottawa. Includes an 1891 letter from London with particulars of death sent by his grandson the Sixth Duke. Also a letter to Morgan in a three cent Small Queen envelope from Belleville. Estimate $100, sold for C$160 plus buyer’s premium. 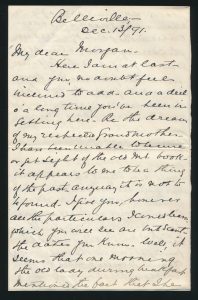 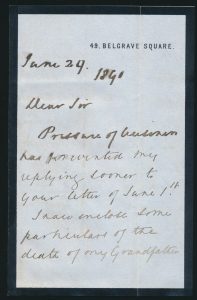 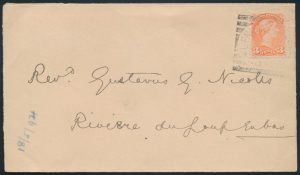 Lot 3211 LENNOXVILLE QUE. squared circle, a very fine (but light) strike -/MY 18/94 tying a 3c Small Queen to cover to Rivière du Loup en Bas (with MY 19/1894 receiver on back). Date on squared circle is very weak, but can be verified by the clear backstamp. Bit of docketing on front, still very fine. RF 80 From The Ted Kerzner Squared Circle Cancellations of Canada. Estimate $100, sold for C$275 plus buyer’s premium. 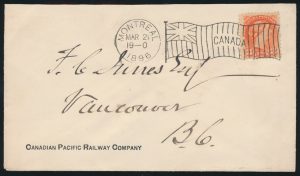 Lot 2292 Montreal 1-1 Imperial Ensign flag cancel, ideal MAR.21.1896 impression, ties 3c Small Queen to a fresh CPR cover mailed to Vancouver with backstamp receiver. This cancel is only known used at Montreal on Saturday evening March 21 and from 10am to 11am on Monday March 23, before being replaced by a M2 machine cancel. It is the key to any flag cancel exhibit/collection as it was used on the first day that machine flag cancels were used in Canada. Its rarity, especially on cover, is attested to by the fact that neither the Lingard ORAPEX Grand Award flag cancel exhibit nor the Sessions BNAPEX Grand Award flag cancel exhibit had an example on cover. Also, this cover would be a choice edition to a Small Queen exhibit to show a great use of this stamp. There is a repaired tear to the upper left of the dater hub and on the back flap, but these do not detract from this elusive flag cancel, which seldom comes to market. Langford’s 2008 catalogue value for use on cover is US$1,500 or about C$2,000. Estimate $1,800, sold for C$1,900 plus buyer’s premium.