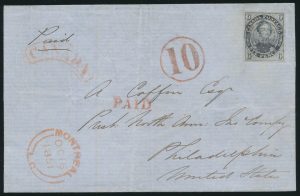 Lot 5 Canada #2 6d Slate Violet Consort Imperforate on Laid Paper on Folded Cover, mailed Montréal on OCT.16.1851 to Philadelphia. This folded cover (no letter inside) is franked with a very fine and fresh, four margin 6d Consort on laid paper, cancelled with a light target cancel. There are a “CANADA” in arc, a “10” in circle and a “PAID” markings, all in red on front, alongside the red despatch datestamp. A very fine and appealing cross-border cover, with “Juliard” owner’s handstamp on back, also ex. “Carrington” (2002) and Daniel Cantor (2011) collections, and accompanied by a 2011 Greene Foundation certificate. From the Outaouais Collection. Unitrade CV$3,000. 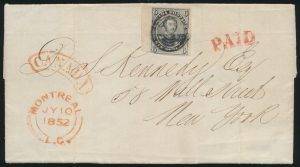 Lot 1119 Canada #2 6d Consort Imperforate on Laid Paper on Folded Cross-Border Letter, mailed from Montreal on JUL.10.1852 to Kennedy in New York City, franked with a 6d slate violet Consort, with sheet margin at left, two other large margins and cut into at bottom, cancelled by a target cancel in black. The folded letter (with letter inside) also has a CANADA in arc and a PAID, both postmarks in red. The stamp has a very light (almost imperceptible) horizontal crease from the cover, still a very fine cover. Accompanied by a 1984 B.P.A. certificate incorrectly identifying the stamp as a later printing. Unitrade CV$3,000. 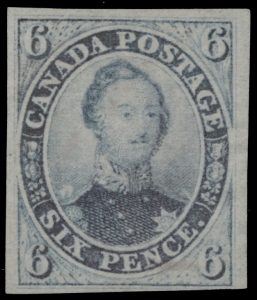 Lot 10 Canada #2 1851 6d slate violet Consort Imperforate, on Laid Paper, unused (no gum) with 3 large margins plus one close, but clear of outer frameline at bottom right, fine-very fine. Accompanied by a 1994 Greene Foundation certificate stating “with slight stains.” An attractive and appealing example of this Canadian rarity. Unitrade CV$45,000. 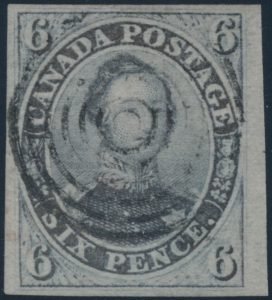 January 26, 2021 — Please note that owing to the provincewide shutdown effective in Ontario from January 14th, we have decided to postpone Sale 35 until a date yet to be determined. When the sale takes place, there will be no public floor bidding, as we continue to follow our safety protocols during the Covid-19 pandemic. The sale has been posted to Stamp Auction Network for bidding and catalogues have been mailed. To get regular updates, please subscribe to our Mailing List.