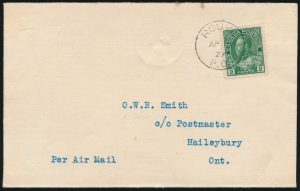 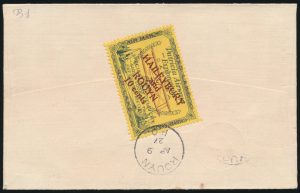 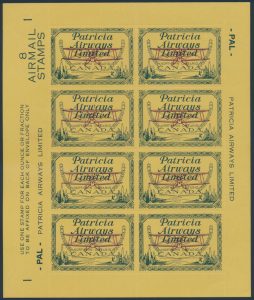 Lot 436 Canada #CL43var 1928 (10c) Patricia Airways Limited Issue with Unlisted Variety, a mint never hinged complete pane of eight from plate 1, showing plum coloured airplanes (as opposed to red). A remarkably distinct shade difference which should be listed at a premium, and probably scarce, as the recent major semi-official offerings we checked did not include any. Quite fresh, with bright colours, extremely fine. Estimate $250, sold for C$1,050.00 plus 17% buyer’s premium. 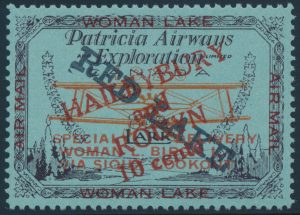 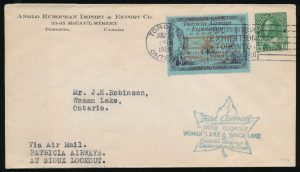 Lot 467 Canada #CL18, 18c July 24 1926 Flown Cover Franked with two CL18 stamps, one with the “OTT” Variety, franked with a 2c green Admiral plus a CL18, both tied to front of cover by a JUL.24.1926 Toronto slogan cancel, alongside a blue-green Maple Leaf cachet for the flight. The back of the cover has a second CL18, but with the rare “OTT” instead of “OUT” variety (CL18c, $750 on cover), tied by an AUG.2 Woman Lake c.d.s., alongside a JUL.26 Sioux Lookout c.d.s. The cover has an Anglo European Import & Export Co. Toronto corner card. A rare cover, not only for its double CL18 franking, but for the variety on the second stamp. Estimate $500. 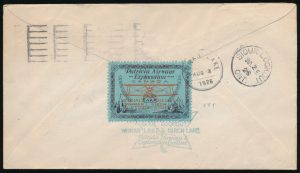 Lot 372 Canada #CLP7 1928 ($1) Red on White Moose Jaw Flying Club, a complete vertical pane of five mint stamps, top and two bottom stamps are very lightly hinged (almost imperceptible), leaving stamps 2 and 3 never hinged. Quite fresh and extremely rare, with only two known to have survived. The owner, who had a strict “never hinged criteria” looked far and wide for a never hinged example and was told by several specialists that such a “unicorn” did not exist and that this was probably the “best one out there.” A great opportunity for the advanced Semi-Official collector, or seeker of the very rare. Unitrade CV$18,000.