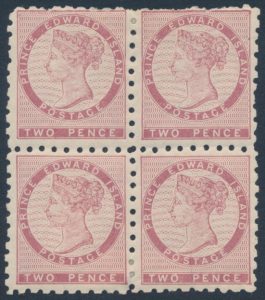 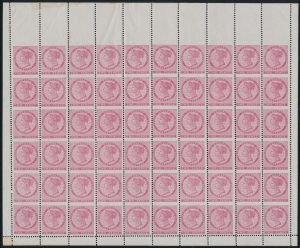 Lot 587 Prince Edward Island #5d 1862 2d rose Queen Victoria, Perforated 11.7, Imperforate Horizontally, a full sheet of 60, with selvedge all around, having all of its horizontal perforations missing, except for those under the bottom row. The owner described it as an early printing, as there is no variety to the TWO in position 54. There are, however other varieties, such as for example the constant variety in position 30 “the T flaw”, still unlisted in Unitrade. A similar sheet resided in the Dr. Carr collection (sold in 1999) and we know of none other. Full original hand applied gum, stamps are never hinged, hinging in margin at top, with a couple of light toning spots (these seen on back and do not detract) as well as light creases, still one of the key lots in this collection and rare. Catalogued as 27 fine and 3 very fine pairs. From the Louis Sidney Crosby Collection of Prince Edward Island. Unitrade CV$11,100, sold for C$5,600 plus buyer’s premium. 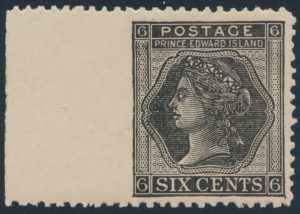 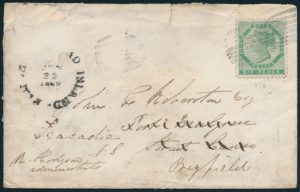 Lot 607 Prince Edward Island #7 1869 6d Inter-Colonial Cover, mailed from Charlottetown on JUN.23.1869 and addressed to “Port Mulgrove / Straight Canso” then re-directed to “Tracadie / Bayfield”. Franked with a very fine copy of a 6d deep yellow green perforated 11½, tied to cover by grid cancels. The back shows “New Glasgow,” “Port …” and “Pictou” datestamps. Opening tears, missing part of back flap and overall aging, still a scarce use of this stamp. From the Louis Sidney Crosby Collection of Prince Edward Island. Unitrade CV$600, sold for C$550 plus buyer’s premium. 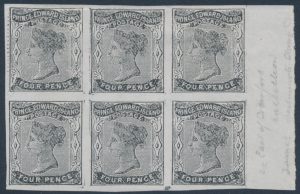