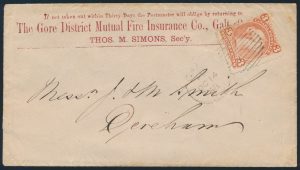 Lot 728 Canada #33 1868 3c Large Queen on Laid Paper on Advertising Cover, from the Gore District Fire Insurance Co., mailed from Galt (OCT.14.1868 duplex) to Derenham, with Ingersoll (OCT.14) and Tilsonburg (OCT.15) transits on back. The stamp is a fine centered single on laid paper (tiny tear and corner crease), which was removed to confirm and placed back. A very fine and attractive cover, with accompanying 1991 Greene Foundation certificate. Unitrade CV$2,500. 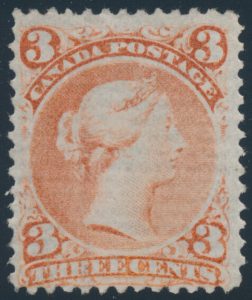 Lot 59 Canada #33 1868 3c Red Large Queen on Laid Paper, unused (regummed) with bright colour, full perforations with pleasant centering, fine. One of Canada’s rarest stamps, with fewer than ten mint or unused examples recorded. In fact, of all the major numbered Canadian stamps, only the #2 and #31 are known in similar small quantities. This stamp is likely the second nicest example, with the original gum example in the Firth collection appearing to being the finest. Ex. Vadeboncoeur. From the Outaouais Collection. Accompanied by a 2002 APS certificate and a (pink) 2010 Greene Foundation certificate. Rsv. $10,000. Unitrade CV$25,000, sold for $12,000 plus 17% buyer’s premium.

One of the showpieces of the first part of Outaouais Collection. 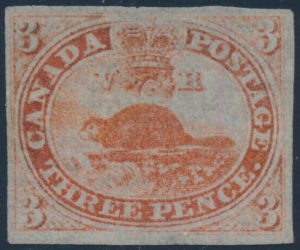 Lot 4 Canada #1a 1851 3d Orange Red Beaver Imperforate on Laid Paper. Canada’s first stamp, engraved by Alfred Jones using a very similar design proposed by (later Sir) Sanford Fleming. This stamp has two certificates of authenticity: a 1985 Greene Foundation certificate stating “…Mint, O.G., genuine…” and a 2015 Greene Foundation Certificate stating “…#1a, unused, on laid paper, orange red shade, genuine in all respects”. The gum was removed after 1985 to preserve the overall freshness and quality of the stamp. For the record there is a tiny faint crease entirely in the lower right margin which was not mentioned in either certificate; this could be literally cut away and there would still be four full large margins. This very fine stamp with fresh colour and full margins is a very rare example of Canada’s first stamp. It once adorned the Lindeman and the “Outaouais” collections, and was sold by us in part one of the latter sale in September 2017 for $75,900 (including buyer’s fee). Its new owner thought it fitting to re-offer it at the same time as part two of this lovely collection here, after a 2½ year ownership. One census of unused mint laid paper three penny beavers puts the number at about twenty. Although this might be a little bit low, unfortunately many of these mint and unused are cut into or have faults and some are in institutional collections. It is likely that fewer than a handful of very fine four margin mint number ones are available to private collectors. Rsv. $30,000. Unitrade CV$60,000, sold for $34,000 plus 17% buyer’s premium. 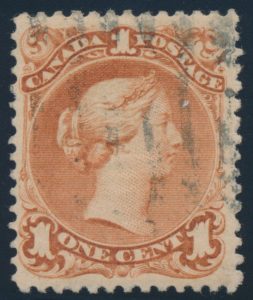 Lot 33 Canada #31 1868 1c red brown Large Queen on Laid Paper, used with a grid cancel, fine-very fine with clear laid lines. Certainly one of the nicest examples we have handled, completely sound and lovely in all respects. From the John Hillson Collections. Unitrade CV$7,000 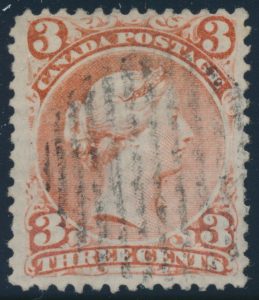