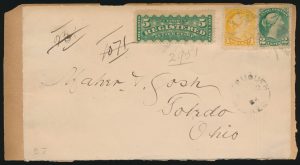 Lot 671 1884 Whitemouth Keewatin Small Queen Registered Cover front on a larger piece, probably a parcel wrapper. Mailed from Whitemouth KEE to Toledo, Ohio on FEB.12.1884, a desirable example of this better postmark (recorded used from 1881 to 1886 only). Franking is made up of a 1c and 2c Small Queen plus a 5c registration for the cross-border registration rate. A rare item, Whitemouth was transferred over to Manitoba in 1882 but continued to use their KEE datestamp. Estimate $200, sold for C$450.00 plus 17% buyer’s premium. 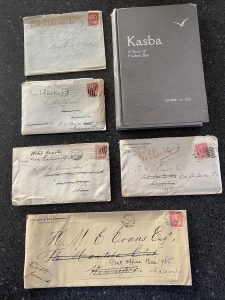 Lot 672 Correspondence from Norway House Keewatin, 1906 to 1909, consisting of fifteen 2c Edward covers (one registered is missing its stamp), each still retaining its original letter inside. These covers are all addressed to Harry Marshall Erskine Evans either in Winnipeg or in Edmonton (he seems to have been travelling between both places in this period). Evans became Mayor of Edmonton in 1918 and had moved to the area to develop a coal mine. The letters were written in a number of different places (as per headlines) including The Hudson Bay Company in York Factory, Fort Churchill, Oxford House, Pepekwatooce, Churchill, God’s Lake, and Split Lake, and all despatched from Norway House Keewatin, except for one mailed from King Edward Man. Before this correspondence was found, only about a dozen Norway House postmarks had been recorded. The covers help to learn how mail was delivered in this part of the world, by analyzing all of the backstamps for routings, etc. These other postmarks include Edmonton, Selkirk, Winnipeg, Gimli, Lac Ste Anne, Icelandic River, Stony Plain and Winnipeg Beach. The letters are a most fascinating read (some are quite long and interesting) were written by, and about a number of people involved in the Northern fur trade, and touch on a number of subjects including the writing of the book Kasba, a Story of Hudson’s Bay (a rare surviving example of this book is included with the lot) and one of the letters includes a draft of the preface page. One of the covers also includes four real photographs of Norway House (very rare). Eight of these letters were extensively written about in issue 72 of The Northerner, the newsletter of the Northern Canada Study Group, a study group of the Postal History Society of Canada (article is included with the lot). A most fascinating and historically important lot, scans show an overview. Estimate $500, sold for C$1,100.00 plus 17% buyer’s premium.