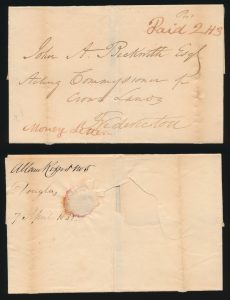 Lot 49 1890s 1c yellow, diagonal bisect, tied by squared circle, paying the ½c domestic second class rate for transient newspapers. The Railway News newspaper masthead (folded), mailed from Fredericton, N.B. (NOV.8.1897) to Westmorland Street in Fredericton. A rare franking, which was authorized by the Canadian Post Office for the Fredericton Post Office between the dates of November 5th and 8th, at which time no ½c adhesives were available. Bit of wear due to the nature of the paper, still very fine and a desirable usage of the 1c stamp, with only six legitimate examples of this bisect having been recorded. A famous item, with great provenance. Accompanied by 1982 RPSL certificate. (Unitrade 35c)

Illustrated in: The Postage Stamps and Postal History of Canada by Winthrop Boggs, p.303.
Unitrade CV$6,000, sold for $6,200 plus buyer’s premium.