One of our earliest consignments came into Sparks Auctions right after our last sale. It was a lifetime accumulation in fifty-nine cartons. Some of the cartons were as small as an “archive” or “banker’s” box, but others were at least twice that size. There was a lovely Commonwealth Collection and an extensive collection of U.S. precancels. Unfortunately for our describers, many of the stockbooks were arranged somewhat haphazardly. We would find several pages of Channel Islands, followed by Falkland Islands, then used Canada blocks, and so on. Some of these were lotted as we received them; others we carefully re-arranged or took out single lots. 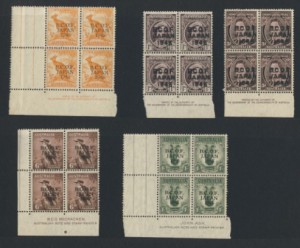 As you can see, there were many interesting items in the stockbooks.

We spent time debating how to lot the U.S. precancels. I won’t spoil anyone’s anticipation but the lots deserve interest and inspection. Since then we have received several more lots from another consignor with tens of thousands more U.S. precancels.

And as you can also see, we continue working on the 454 carton consignment!