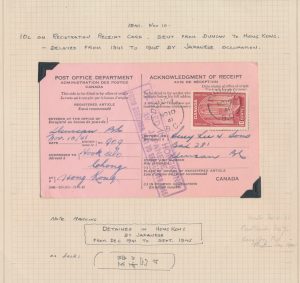 Lot 777 Canada 1941 Detained in Hong Kong AR Card, a Canadian AR card mailed from Duncan BC on NOV.10.1941 to Hong Kong, this AR card is franked with a 10c Memorial Chamber issue. Upon arrival in Hong Kong, it received a “Registered” c.d.s. dated NOV.22 (on back) and was put aside. At the end of the war, it also received a purple boxed “DETAINED IN HONG KONG / BY JAPANESE / FROM DECEMBER 1941 TO SEPTEMBER 1945” on front. There is also a red Japanese censor “chops” handstamp on back. A very rare card, as it was mailed during the fall of Hong Kong to the Japanese, and was likely only forwarded to its recipient sometime after the end of the War in 1945. The card is still mounted on a Gerald Wellburn album page, being a draft only, which he would have later written-up neatly in pen. Estimate C$750, sold for $2000 plus 17% buyer’s premium. 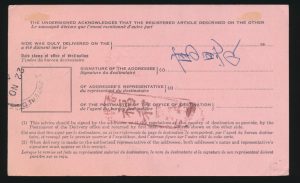 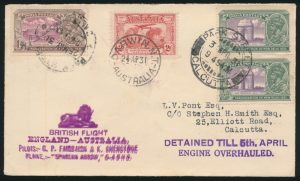 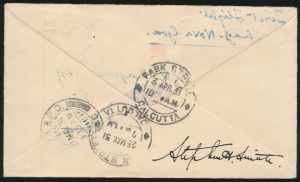 Lot 1572 India APR.3.1931 Calcutta to Port Darwin Australia Flight Cover, franked with a pair of ½a and a single 1a KGV pictorial definitives, plus an Australian 2d stamp tied by Darwin c.d.s. dated APR.24. The cover has a purple cachet depicting a lion and “BRITISH FLIGHT / ENGLAND – AUSTRALIA” plus the pilot names. Also a violet “DETAINED TILL 5th APRIL / ENGINE OVERHAULED” handstamp on front. Back shows two Park Street Calcutta c.d.s. dated APR.3 and MAY.25 alongside Stephen Smith signature. Very fine, with only 43 items flown. From the The Leon Victor Pont Collection of Early India, New Zealand and Worldwide Pioneer Flight Covers. Estimate $300, sold for C$1,250.00 plus 17% buyer’s premium.