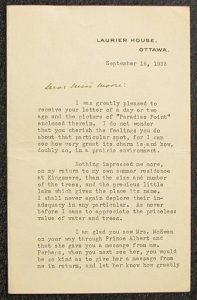 Lot 804 William Lyon Mackenzie King Correspondence, 1933 to 1948, mostly from Canada’s tenth Prime Minister to his “friend” Wilna Agnes Moore of Saskatoon (born 1890 in Fort Qu’Appelle), and also contains some personal letters from Miss Moore’s personal archives. The correspondence includes about 40 letters from King to her (1933-1948), mostly all of a personal nature (see Canadian Press wire article, Winnipeg Free Press, June 5, 1968). The letters are mostly on Laurier House stationery, but also contains one on The Cloister House, Georgia illustrated stationery (1935), Hotel de la Paix in Geneva illustrated stationery (1936) and some on official Office of the Prime Minister letterhead. The contents of the letters are fascinating, as they occurred in the days before, during and after World War II. One 1947 letter from King tells her how he appreciated her gift of flowers and bottle of “Molyneux Eau de Cologne” but would have liked to return it to her as he knows how difficult it must have been for her to purchase it in Paris in these times. Another letter dated December 14, 1944 he writes “… the government has passed through a storm which threatened to destroy the party and the government and to leave its marks for generations to come in the country itself. Providence alone is to be thanked for having spared us all from such an appalling situation…” His letters are all neatly typed and hand signed by himself, and some have additional hand-written notes from him on them.

Miss Moore was involved with Aboriginal and Metis affairs in Western Canada, and later worked at the Canadian Embassy in France, and there is correspondence from Yves Lamontagne there to the effect that she was discharged to be able to open a radio station in Dawson Creek, BC (CJDC) “in order to further develop cultural relationships between France and Canada,” with various official letters describing the purchase of Marconi 1,000 watt equipment ($2,000), the purchase of ten acres of land for $500, various licenses, etc.

Miss Moore’s archives also contain several other letters addressed to her, mostly to do with the radio station or other matters, and includes also a 1957 photo-card hand-written and signed by John Diefenbaker, thanking her for her help in his election campaign. Other items include her Université de Paris student cards for 1931, Carte d’Identité Française dated 1931 with her photo and address at 67, rue du Théatre in Paris, as well as other photographs and documents. Lastly, the lot includes a nice collection of 19 different books by or about William Lyon Mackenzie King. A rare offering. Estimate $1,500, sold for C$5,200.00 plus 15% buyer’s premium. 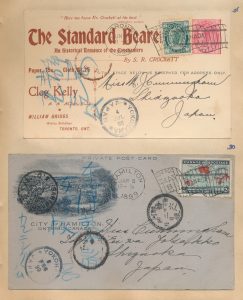 Lot 1034 Old Time Correspondence, Mostly to or From Japan, 1880s and 1890s with over 80 postal stationery cards, mailed to Japan from a number of countries such as Canada (many), Hawaii, USA, Russia, Great Britain, Italy, Hong Kong, China, Straits Settlements, Ceylon, Egypt, France, etc. Also a few local cards from Japan or the US. Many of the cards are UPU and pay the correct rate, but many are also uprated. We note lots of postmark interest, rates, routes, etc. Most of these cards were mailed to Miss Martha Jane Cunningham, who was a missionary in Japan from 1887 on, and eventually became the first principal at a school there (includes a copy of the history of this school and a little biography on her). A lovely and colorful collection, but unfortunately all the cards have been glued onto pages in a book. Still a great opportunity to acquire such a scarce destination collection. Estimate $350, sold for C$4,800.00 plus buyer’s premium.