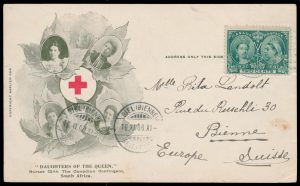 Lot 643 Lovely 1900 Canadian Red Cross Boer War Patriotic Private Post Card, mailed Berlin Ontario (NOV.6) to Bienne Switzerland (NOV.16 receivers on front), franked with a 2c Jubilee. The illustration depicts a red cross plus four photos of Canadian nurses inside maple leafs, entitled “The Daughters of the Queen / Nurses with the Canadian Contingent / South Africa”. A rare and lovely card, accompanied by a copy of a 1994 BNA Topics article announcing a new record price obtained ($950) for either this card, or one just like it. Very fine. Ex. Liptak collection. Estimate $500 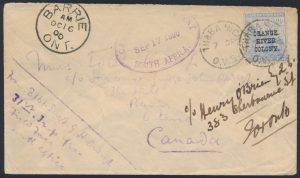 1900 Boer War Cover, mailed from Thaba Nchu (O.V.S.) on SEP.7.1900 and franked with a 2½d stamp, then received a purple Canadian Contingent / South Africa datestamp on SEP.17.1900, then presumably went through GB before it arrived at its destination of Barrie, Ontario on OCT.15 (receiver on back). The next day it was forwarded to Toronto where it was received (on back) on OCT.16. A lovely Second Canadian Contingent cover, which are not commonly seen franked as such, very fine. Estimate C$500. 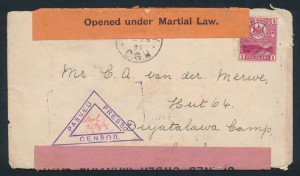 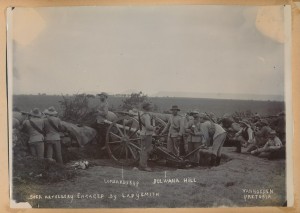 BOER WAR and POST WAR RELATED Includes picture postcards, programmes, invitation, mementos, etc. many relating to Umtata (later Mthatha) where Viner’s camp was located. Of note are over 150 real photographs many showing the Cape Mounted Riflemen in action. See the detailed page on our site for details.