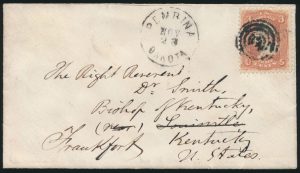 Lot 613 1868 Rupert’s Land Cover with United States Stamp, franked with a 3c rose Washington stamp (grilled, issued from 1867 to 1870) and in use on mail from Red River until the fall of 1870. The stamp was applied at Fort Garry, and the letter carried by the territorial courier to Pembina, Dakota, where it was datestamped NOV.23 (1868). The address on the envelope is in the handwriting of Archbishop Robert Machray, second Bishop of Rupert’s Land, whose seal is embossed on the back flap. Archbishop Machray had made a trip to Canada and to the United States in the summer of 1868. The Bishop of Kentucky (to whom this letter is addressed) was his host in New York City. A very rare usage of United States postage on Canadian mail. Estimate $1,000.