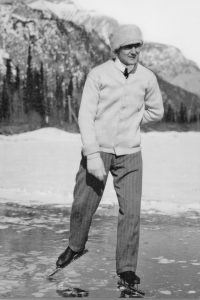 We are proud to offer the Louis Sidney Crosby collection of Prince Edward Island stamps. Mr. Crosby was born in PEI in 1888 and moved to Banff, Alberta in 1907. There he climbed many mountains (including several first ascents) and worked for the Brewster Transport Company for fifty years, including as president. He wrote many articles on Small Queens as well as PEI stamps and postal history. He died in 1964 at the age of 76. While he shares a middle name with the NHL superstar, we have not been able to confidently establish their kinship.

Most of the postal history he had collected was sold in two sales at Sissons in Toronto in 1967 and 1968, but his family could not find the rest of his renowned PEI collection until a neglected suitcase came to light in 2017. The well-preserved stamps you will therefore see in this section have been unseen for 53 years.

When Lou Crosby was a young man in PEI, he served under Captain Arthur Bartlett (the well known Charlottetown stamp dealer) in the No.1 Co. 4th Reg. Artillery. This is probably where Mr. Crosby got interested in PEI stamps, as Bartlett had purchased a large amount of the PEI remaining stock. The Crosby and Bartlett families remained in touch for over sixty years. He was one of the founders of the now defunct BNAPS PEI study group as well as the still active BNAPS Small and Large Queen Study Group. 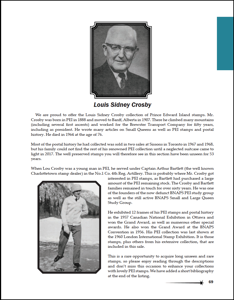 He exhibited 12 frames of his PEI stamps and postal history in the 1957 Canadian National Exhibition in Ottawa and won the Grand Award, as well as numerous other special awards. He also won the Grand Award at the BNAPS Convention in 1956. His PEI collection was last shown at the 1960 London International Stamp Exhibition. It is those stamps, plus others from his extensive collection, that are included in this sale.

This is a rare opportunity to acquire long unseen and rare stamps, so please enjoy reading through the descriptions and don’t miss this occasion to enhance your collections with lovely PEI stamps. We have added a short bibliography at the end of the listing.

January 26, 2021 — Please note that owing to the provincewide shutdown effective in Ontario from January 14th, we have decided to postpone Sale 35 until a date yet to be determined. When the sale takes place, there will be no public floor bidding, as we continue to follow our safety protocols during the Covid-19 pandemic. The sale has been posted to Stamp Auction Network for bidding and catalogues have been mailed. To get regular updates, please subscribe to our Mailing List.