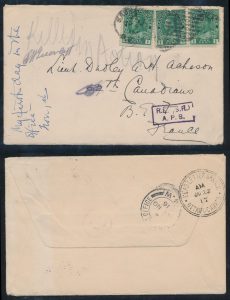 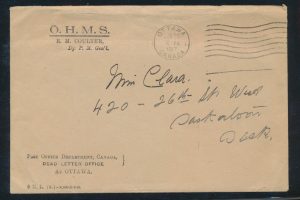 Lot 1042 1916 “Killed in Action” Soldier’s Letter returned to Sender in an Ambulance Envelope, mailed from Saskatoon and sent to Lieut. D. Atheson with the 24th Canadians, B.E.F. France, arrived at F.P.O. 4.W on NOV.29.1916. Manuscript “Killed in Action” on front along with the signature of whoever wrote it. Cover returned to Canada and received at the Ottawa dead letter office on JAN.22.1917, opened to discover its sender and was placed in an O.H.M.S. envelope and mailed to Miss. Clara in Saskatoon. The O.H.M.S. envelope is missing its back flap, else very fine. Estimate $200.