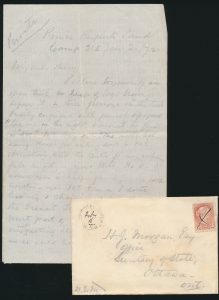 Lot 805 Canada Correspondence Pertaining to the Surveying of the CPR Route North of Lake Superior, 1872 to 1876, being the material originally used by George MacManus to write a two-part article in the PHSC Journal (included in lot). Contains a total of 22 letters (most with their covers) mailed by William E. Morgan (member of the Fleming survey team) to his better known brother Henry J. Morgan in Ottawa. These detailed letters show the trials and tribulations associated with such a trip in Northern Ontario in those days. There are way too many interesting quotes we could make here but recommend viewing the lot in person to better appreciate. There are many references to places he went through (and wrote from) such as “Pie Post Camp“, “Camp 8”, “The Pie”, “Prince Ruperts Land“, “Camp 35”, “Red Rock“, “Lac des Milles Lacs“, “Camp 76”, “Fort Francis” and many more. From the point of postal history, this is also an interesting lot, for the scarce early (for this area) broken circles it contains, mostly on 3c Small Queen covers, but also some free-franked, with rate handstamps. Noted Fort William, Red Rock, Thunder Bay, one cover mailed “via Duluth” in 1874, Michipocoten River CW, etc. Faults, still a fascinating read and historically important. Estimate $1,500, sold for C$4,000.00 plus 15% buyer’s premium.