All this week we will be featuring highlights from the Crosby Collection. 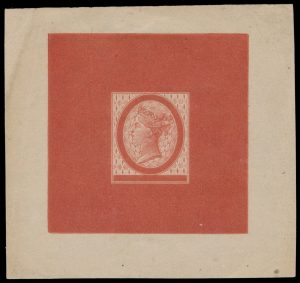 Lot 556 Prince Edward Island Non Denominated Large Die Essay in Deep Red Orange, measuring 74 x 69 mm, on thick, coarse paper. At the time the Cusworth collection was auctioned in 2005, it was believed that there were about 7 copies known of this in different colours, including two in The Queen’s collection. Corner crease at top left, still rare and desirable. Minuse and Pratt # 2E-Ab. From the Louis Sidney Crosby Collection of Prince Edward Island. Estimate C$1,500.