Today is the day. We are proud to facilitate the auction of this world-class stamp. 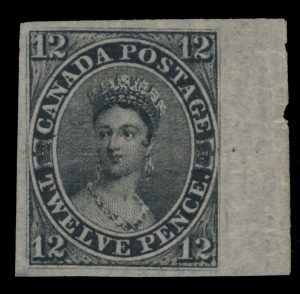 Lot 3 Canada #3 1851 12d black Queen Victoria Imperforate on Laid Paper. The twelve penny was recognized from the earliest days of philately as rare and desirable. The Chalon portrait was copied by Bahamas, Queensland, Tasmania, New Zealand, New Brunswick, Nova Scotia as well as other British Colonies.

This stamp was sold by Charles Phillips and was owned by Charles Lathrop Pack as the top stamp in a vertical pair. It is position 60 within a plate of 100. The pair was sold at auction in 1944 and again in 1959 but by 1976 it had been separated and received a Certificate from Herbert Bloch. With deep colour and a clear distinct impression, four large margins, full original gum lightly hinged, easily visible laid lines, fresh in all respects and a full sheet margin at right put this stamp in the first rank. Among the very fine mint twelve penny stamps, there are usually three which are regarded as being the most desirable. The full sheet margin of this gem compares favourably with another exceptional twelve penny, the Dale-Lichtenstein single from position 80 with an irregular sheet margin. As a result a number of advanced collectors confirm the opinion that the example from the Outaouais Collection is the most desirable and best of the best.

This stamp has three Certificates of Authenticity. These are from 1976 the Friedl Expert Committee, 1983 Greene Foundation, and 2013 Greene Foundation “Scott No. 3, mint, O.G., position 60, genuine in all respects.” From the Outaouais Collection. 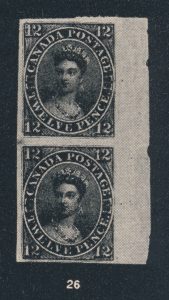