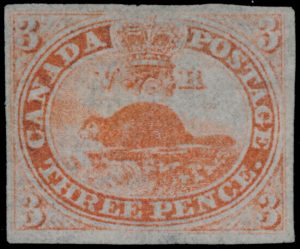 Lot 1 Canada #1a 1851 3d orange red Beaver Imperforate on Laid Paper. Canada’s first stamp, a three penny value paying the domestic rate and showing a beaver was engraved by Alfred Jones using a very similar design proposed by (later Sir) Sanford Fleming. One census of unused mint laid paper three penny beavers put the number at 18. Although this might be a little bit low, unfortunately many of these are cut into or have faults and some are in institutional collections. It is likely that fewer than a handful of very fine four margin number ones are in private collections.

This stamp has two Certificates of Authenticity: A 1985 Greene Foundation Certificate states”…Mint, O.G., genuine…” and a 2015 Greene Foundation Certificate states …”#1a, unused, on laid paper, orange red shade, genuine in all respects”. It is unclear to us what happened to the gum after 1985 but assume that the authenticity of the “original gum” was questioned and a previous owner soaked off the gum. For the record there is a tiny faint crease entirely in the lower right margin which was not mentioned in either certificate; this could be literally cut away and there would still be four full large margins.

This stamp with fresh colour and full margins is a very rare example of a very fine Canada’s first stamp. From the Outaouais Collection.