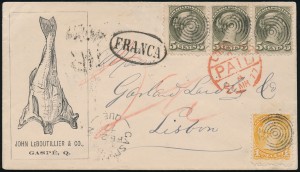 Lot 461 Canada 1877 16c pre-UPU cover to Portugal, franked with 1c yellow orange, perforated 11½x12, and 5c olive green strip of three, all cancelled with neat target cancels, paying the old 16c pre-UPU letter rate. Mailed at Gaspé Basin, Qué. (FEB.28.1877) to Lisbon, Portugal (Mar. 27 receiver on back) via Québec (Mar. 7) and London, England (Mar. 21), and with FRANCA paid handstamp applied upon arrival in Portugal. For a period of three months (Oct. 1875 to Jan. 1876) the letter rate to Portugal was reduced from 28c to 16c, prior to being further reduced to 10c. This cover was mailed in the 10c rate period, but franked at the old 16c rate, probably due to the postmaster not being aware of the change, or the sender wanting to ensure that the cover was sent fully prepaid. A lovely and clean cover, with illustrated advertising from John LeBouthillier & Co. depicting drying cod fish, pristine and extremely fine. (Unitrade 35d, 38)

This much-heralded cover has always been considered to be one of the most important and desirable Small Queen covers in existence due to the combination of a rare destination and rate, the rarity of illustrated pre-UPU covers, and the overall quality and attractiveness of the stamps and envelope. One of the highlights of the Cantor collection and a rare opportunity for a collector to become the next custodian of this fantastic cover which has graced several important Small Queen collections.