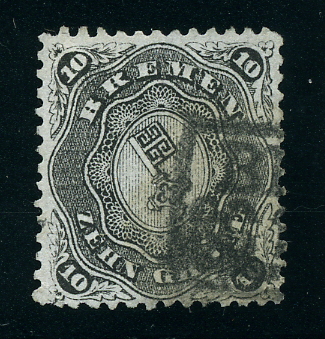 Lot #1560 Germany – Bremen #14 – Coat of Arms – 10gr Black – Perf 13.0 x 13.0. Officially the last issue (in 1867) of the Free City of Bremen, which became integrated with the North German Confederation the following year. Typical centering else very fine in all respects with period usage "Bremen" straightline boxed cancel. Accompanied by 1983 Friedl photo certificate stating "…is in my opinion genuine. I have signed it. (Herbert Bloch)". (Mi 14 €1400) Sc:$1000

Ian remarks: "The stamps issued by the German States prior to unification include some of philately’s great classics. Finding the scarcer examples in top quality involves a lot of searching and sometimes disappointment. Here’s one you will be proud to put in your album."